As an integral part of our mission to connect people to plants, the Garden acts as a community gathering place for a wide variety of events. We host thought-provoking programs that connect people to nature, promote appreciation of plants, and explore our world through new lenses. Sign-up for our newsletter below to be the first to receive event announcements. 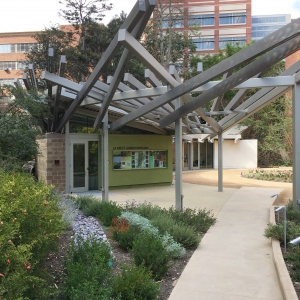 Explore our living museum featuring collections of plants from around the globe! Join a Garden Educator for a free guided tour of the Botanical Garden on the first Saturday of every month at 1pm.

We’ll hear the stories of a selection of plants in the garden, and their relevance to human society. All ages are welcome. Tours meet at the La Kretz Garden Pavilion at the northern end of the garden.

Find us on Eventbrite and RSVP to secure your spot. Drop-ins are welcome but may be limited based on each month’s availability.

Everyday the Garden is growing and changing. Subscribe below to receive updates in your inbox every month. Read our past newsletters here.

#POV: You wake up early and walk to @uclabotanical

At the Botanical Garden, insects can be observed pollinating flowers, moving seeds, and so much more. Have you ever stopped to wonder what’s flying, crawling, and wriggling around our city? Over 3,000 species of insects have been observed in Los Angeles on the iNaturalist/Seek apps, and new species are still being discovered by scientists today! Anyone can become a community scientist and help to identify and document species living in our city. Meet your insect neighbors and get ready for the 2021 City Nature Challenge.

Have you ever wondered what your Monstera deliciosa would be like in the wild? Why Tillandsia don’t require soil? Join us to learn about the unique adaptations plants have to survive in their natural habitats, and how that impacts their care in your home.

Led by Botanical Garden staff Terry Huang and Jules Cooch, this intimate conversation will cover a variety of popular houseplants and connect them to interesting specimens in the Garden. Grab your favorite warm beverage and get cozy with us on Saturday morning before caring for all your favorite fronds.

Though much of our programming is free, this special event was limited to Garden Members and was not recorded.

The La Brea Tar Pits in the heart of Los Angeles, California are world famous for their preservation of Ice-Age mammals, especially the iconic, extinct megafauna such as saber-tooth cats, dire wolves, mammoths and mastodons. What is less known, is that the unique asphaltic preservation of past life at La Brea includes much more than mammals, but entire ecosystems of Los Angeles from the Late Pleistocene through the Holocene spanning the last ~57,000 years. While much attention has been given to the fauna, relatively little is known about plant life during this time. Fossil plants preserved at the La Brea Tar Pits include seeds, wood, leaves, needles, cones, pollen and phytoliths. We will detail how these ancient floras reveal a rich history of climatic and environmental change in Los Angeles and Southern California over the last several millennia leading to the formation of our modern day ecosystems. Join scientists Dr. Regan Dunn, Assistant Curator at La Brea Tar Pits and Museum, and Jessie George, UCLA PhD Candidate, to explore the ancient flora of Los Angeles and learn about the fascinating field of paleobotany. Learn more about the La Brea Tar Pits at: https://tarpits.org/

Botany of the Holidays 2020

Seasonal festivities bring together traditions, history, family and friends. To a botanist, they are also a case study of the deeply interconnected relationship between nature and culture. Join us for the 4th annual Botany of the Holidays as we travel to China and Brazil to share the botanical origins of some winter holiday traditions, and see just how important plants are to celebrations around the world. This year’s speakers include:

Focused observation—drawing, sketching, and writing—changes how we look at the world around us. Nature journaling forces us to see, instead of look. Suitable for all levels and ages (including beginners) this workshop will explore various journaling techniques to enhance drawing skills, explore ideas and document our place and time. The only required supplies are pencil (a regular #2 or softer) and paper, although any other art supplies are certainly welcome. A reference sheet handout is available here. Watch the recording here.

The UCLA Art Sci Center and the UCLA Mildred E. Mathias Botanical were excited to collaborate as a site in the prestigious ARS Electronica Festival! Virtual events were recorded throughout the course of the five days. From oak genomics and interspatial communication to COVID-themed opera and fungal projections, a wide variety of topics were explored! The festival was started in 1979, and this year’s theme encompassed ecology, art, design, humanity, and the dynamic changes we have experienced related to the global pandemic. Watch more archived videos here.