You are here: Home1 / newestIndivGardenPlantView

<  back to garden plants

There are winter-flowering species scattered through MEMBG and these are easy to discover on an afternoon walk in the garden. One of these is flowering quince (Chaenomeles speciosa), a spiny deciduous shrub in the rose family from China and Korea. This species has long been cultivated in eastern Asia for its medicinal properties and its native habitat is obscure. In traditional Chinese medicine it is called zhou pi mugua and the fruits are used in anti-inflammatory treatments and to help alleviate nausea. Eaten raw, the fruits are extremely acid but become quite fragrant when cooked. The cooked fruits are used to make quince jam and as a flavor addition for baked apples. 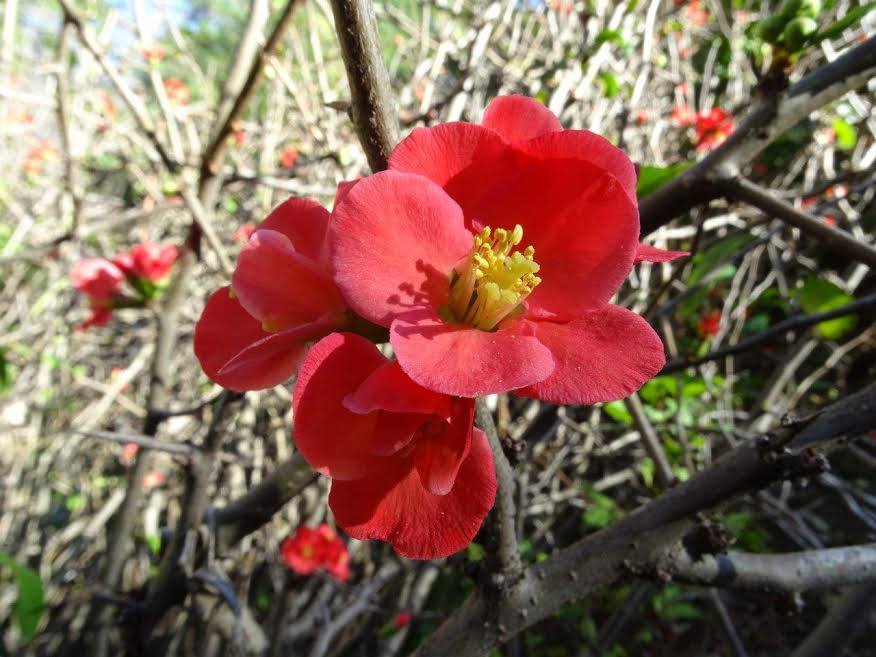 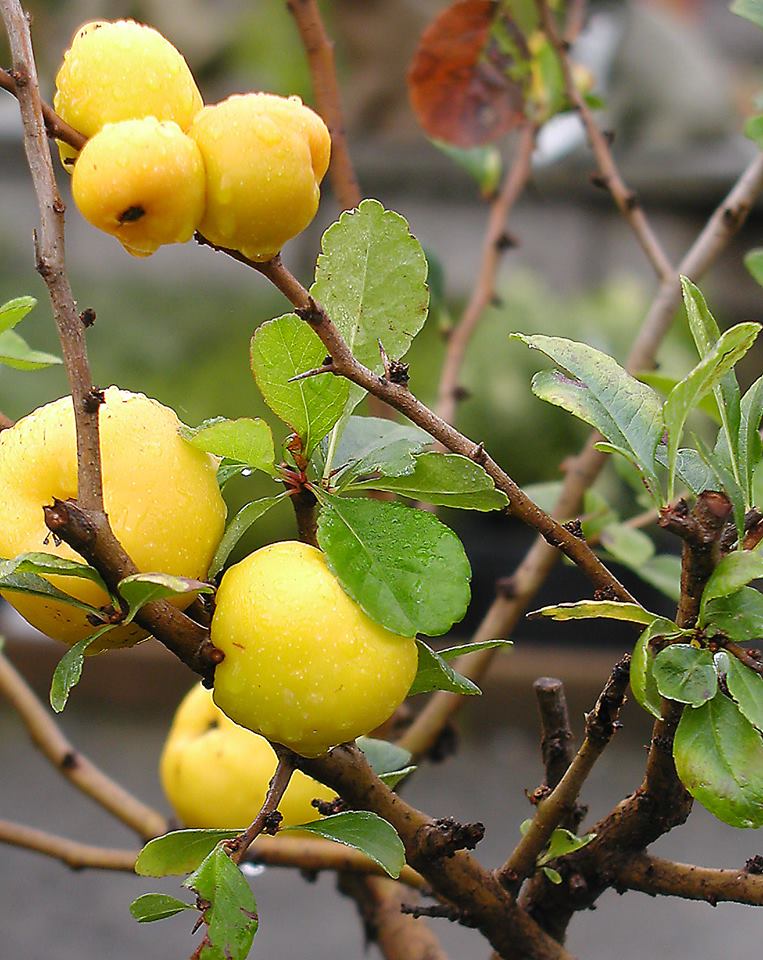 Among the most unusual flowers at MEMBG are those of black coral pea (Kennedia nigricans). This member of the legume family from Southwestern Australia has large and distinctive black and yellow flowers that are unlike those of any other species. These flowers are highly attractive to hummingbirds, bees, and butterflies. Black coral pea is an evergreen vine with three broad leaflets that grows rapidly and readily covers a large fence or almost anything else if not kept in check. It is drought hardy but sensitive to hard frosts. 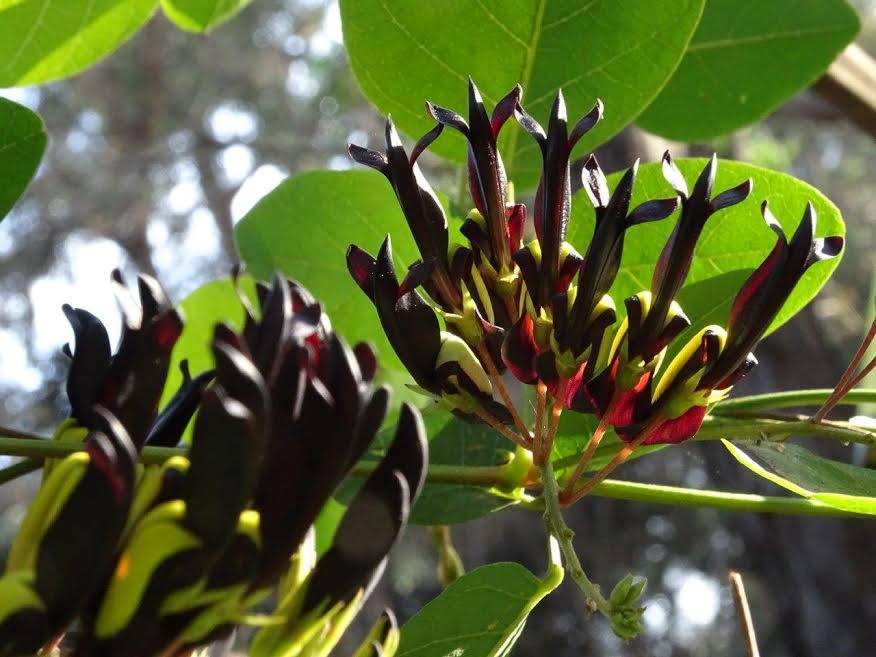 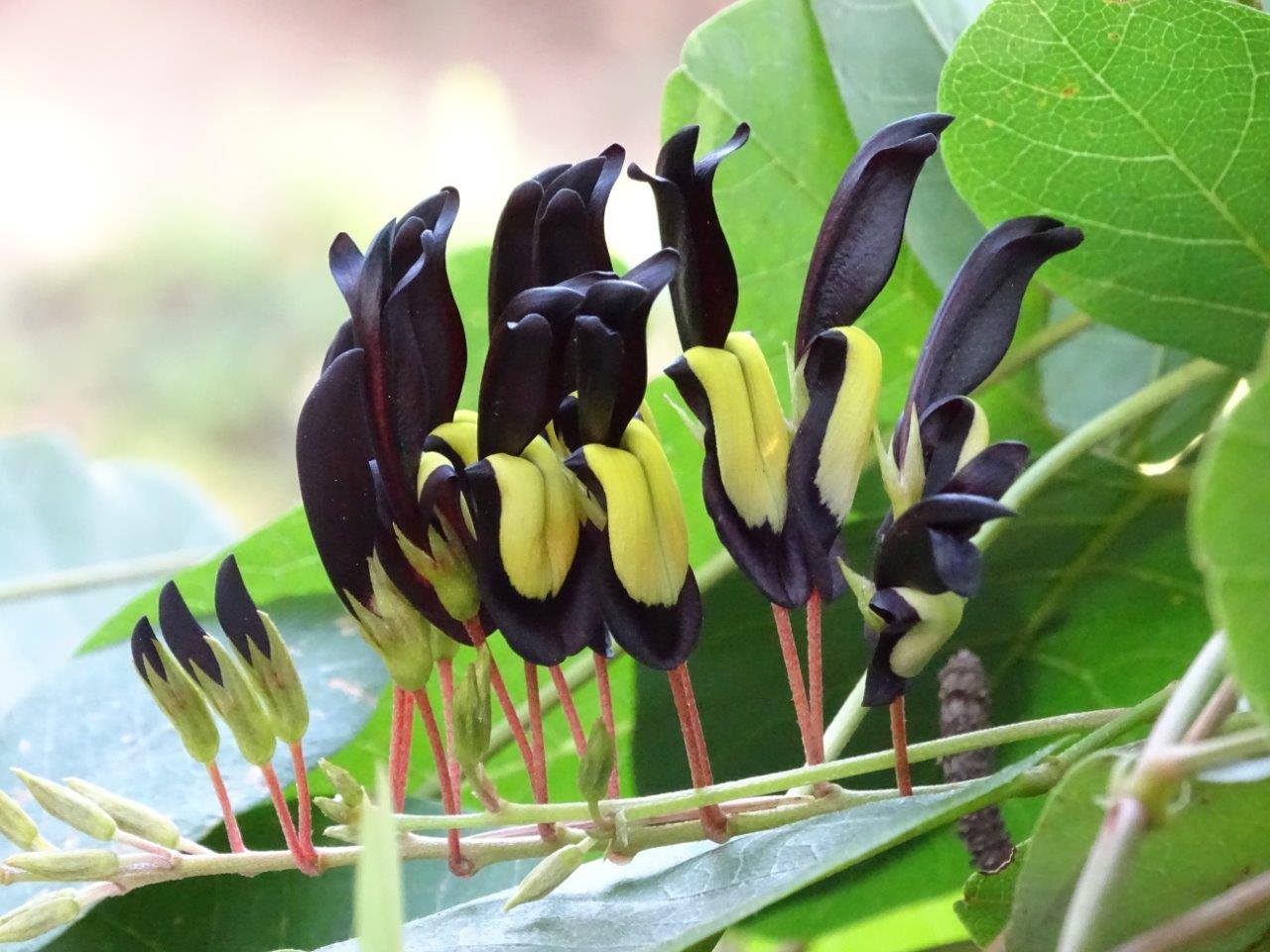 Growing in the MEMBG patio area is turquoise puya (Puya berteroniana), a Chilean bromeliad with a magnificent inflorescence that rises 4 feet above the spiny rosette of leaves below. The individual emerald-turquoise flowers are 2 inches in diameter, with bright orange anthers that contrast beautifully with the petals. Turquoise is an extremely rare color in the plant world, and it's even rarer to be combined with orange. The large stature and riveting coloration of the Puya gives it an awesome appearance. Turquoise puya is easily grown from seed and is frost hardy. It is one of a number of puya species that can be seen at MEMBG, including P. chilensis with yellow flowers and the mound-forming P. venusta with blue-purple flowers. All of these species are native to the mediterranean-climate region of central Chile. N.B. For the taxonomic purists, this species has recently been reshuffled and is now best treated as Puya alpestris subsp. zoellneri. 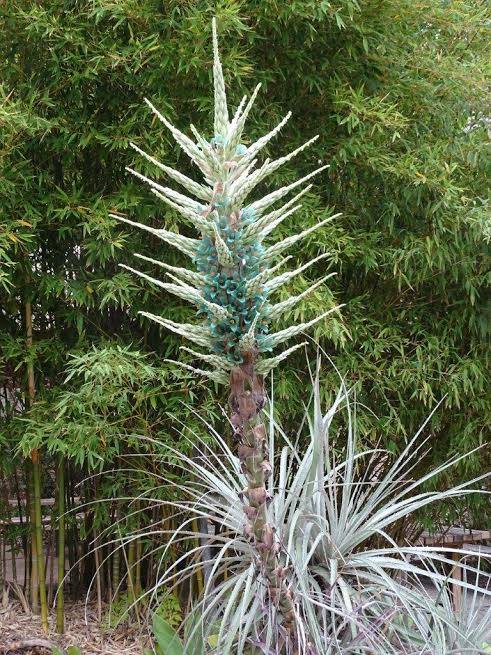 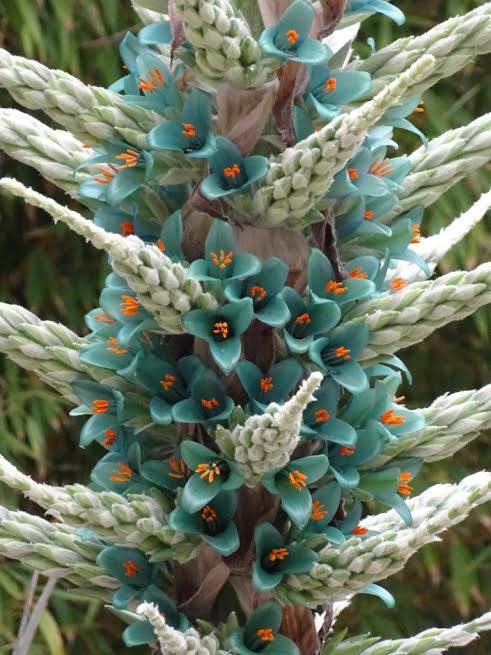 One of the wonderful aspects of MEMBG is the mild coastal climate that allows the garden to grow many tropical species that would not survive the occasional frosts present further inland. An example of this is blue sage (Eranthemum pulchellum), a semi-woody shrub from the tropical foothills of the Himalayas, which can be seen along the outside of the garden fence between the Botany Building and Hershey Hall. The deep gentian blue color of the flowers, borne on long terminal spikes, is quite spectacular. Even when not in bloom, the lustrous evergreen leaves with prominent veins are attractive throughout the year. Despite its common name, blue sage is not a sage at all. It is a member of the acanth family or Acanthaceae. 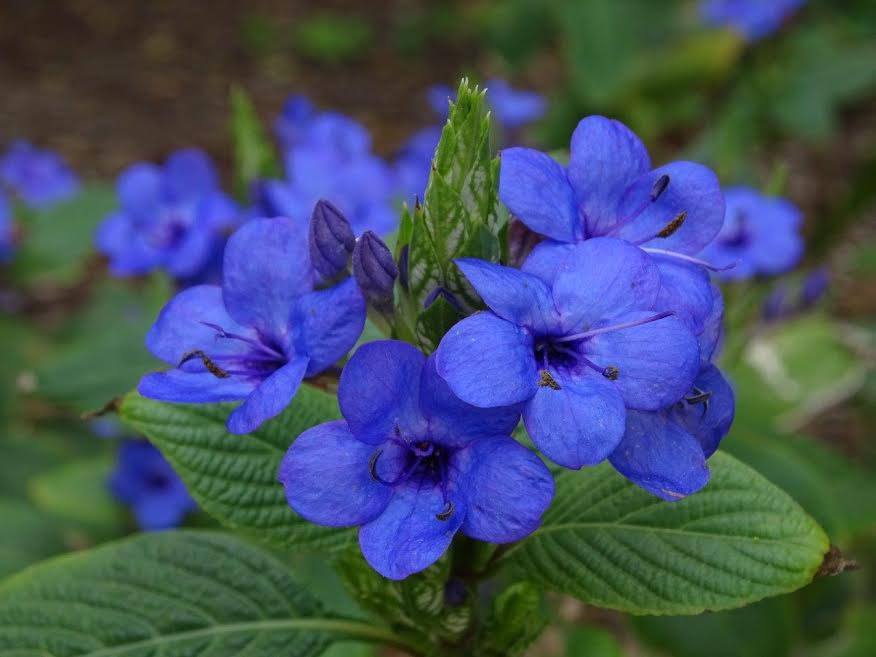 Snowball bush or guelder rose (Viburnum opulus) is a shrubby tree that is native to woodland areas of Europe across to western Asia. It is a member of the Adoxaceae and thus a relative of our native elderberry. It is widely grown as an ornamental plant for its large clusters of white flowers and attractive red berries. However, our cultivar at MEMBG is called "roseum" with sterile flowers, and thus does not produce fruit. The leaves are three-lobed, resembling those of maples, and are shed in winter. The bark of snowball bush contains a coumarin called scopoletin that has a sedative affect. A tea made from the bark is used to relieve all types of spasms including asthma and menstrual cramps, giving rise to an alternative common name of cramp bark. Snowball bush is one of the national symbols of Ukraine where it is called kalyna, The species is widely referenced in Ukrainian folklore, and often depicted in embroidery on towels and shirts. The red berries are said to symbolize blood and undying family roots.

A wonderful drought-tolerant shrub for Southern California gardens is Jerusalem sage (Phlomis fruticosa), This member of the mint family (Lamiaceae) is native to the eastern Mediterranean Basin, a region with a climate like our own. There are many other species of Phlomis is cultivation, including ones with purple or pinkish flowers. In many respects one can see similarities of Phlomis to their cousins the Salvia (sage) species in our gardens. The evergreen leaves are opposite and stems are often covered with white or golden hairs. The flowers are in whorls as with the sages. The name "phlomis" comes from the Greek word for flame, as the leaves of some species were used to make lamp wicks in ancient Greece.

A woody climber on the outer Hilgard Avenue fence at MEMBG is blue sky flower (Thunbergia grandiflora), a member of the Acanthaceae from subtropical Asia.This frost-hardy vine with large evergreen leaves grows quickly and can cover a fence or wall in a single season. It is named for its large blue to mauve flowers, up to three inches in length, with a deep yellow floral tube. Although widely planted, the rapid growth rate has made blue sky flower an aggressive weed of riparian areas in subtropical areas of Australia where it has been introduced. The genus name honors the Swedish naturalist Carl Peter Thunberg (1743-1828) who was a student of Linnaeus and is famous for his years botanizing the Cape of Good Hope in South Africa.

Chile shares a Mediterranean-type climate very similar to that of California, and there are many Chilean species that deserve wider introduction here. A beautiful example of drought-adapted Chilean species is Cordia decandra, a shrubby tree which can be seen in the Mediterranean Garden area at MEMBG. Known locally as carboncillo because the hard wood was once used to make charcoal, Cordia comes from the southern margin of the Atacama Desert where rainfall is very low and highly irregular. It produces 1-inch white, bell-shaped flowers in late winter and continues to bloom through much of the summer. In general appearance this plant might be mistaken for a white-flowered species of Cistus, but can be readily distinguished by its leaves that spiral around the stems rather than arranged oppositely as in Cistus. Like other members of the borage family (Boraginaceae), Cordia has stiff hairs on both the upper and lower leaf surface, giving them a feel like sandpaper.

Despite our hot and dry summers, there are a surprising number of species flower during the summer in the desert garden at MEMBG. One of these is desert willow (Chilopsis linearis), a small tree in the catalpa family (Bignoniaceae) that is native to desert washes in the Southwestern United States and Mexico. Its common name comes from the slender willow-like leaves. However, what makes desert willow such an attractive plant for desert gardens are the large burgundy to pink flowers in summer that fill its canopy and attract hummingbirds and large native bumblebees. Desert willow is drought and frost tolerant, and will grow quite rapidly if given extra water. A poultice made from the bark and leaves has been used to treat fungal infections of the skin.

More than 1,300 species have been described in the genus Acacia, but molecular studies have now revealed that this large genus must be separated into five segregate genera to represent natural evolutionary lineages. The great majority of species occur in Australia and these retain the generic name Acacia (a very controversial story). MEMBG has representatives of Australian acacias and also three of the new smaller new genera, including Mariosousa willardiana from the Sonoran Desert of Mexico. The common name of this multi-stemmed shrubby tree is palo blanco referring to its smooth white trunk with peeling bark. This species can be quite a stunning focal point in a desert garden. Although palo blanco briefly displays small compound leaves, the major photosynthetic organs are flattened green stems. A compound extracted from the leaves, willardiine, has been used in neurobiology research.

Mesquite (Prosopis glandulosa) is a widespread tree across the arid and semi-arid areas of the Southwestern U.S. and adjacent Mexico. These trees are able to grow remarkably fast because they can decouple themselves from the normal environmental limiting factors of water and nitrogen availability. In our deserts the mesquite trees have deep roots that can tap underground pools of water as much as 30-50 feet or more below the ground surface. Like many other legumes, much of the nitrogen for growth comes from a symbiotic relationship with nitrogen-fixing bacteria living in nodules on the mesquite roots. In many ways, mesquite trees are keystone species in our deserts. The flowering trees are very attractive to bees, and mesquite honey is world famous. The leaves and pods of mesquite are high in nitrogen and provide a good source of protein for many native animals. However, because of their rapid growth and the spread of the seeds through the digestive system of rabbits and grazing animals, mesquite can be a troublesome invader of rangelands.